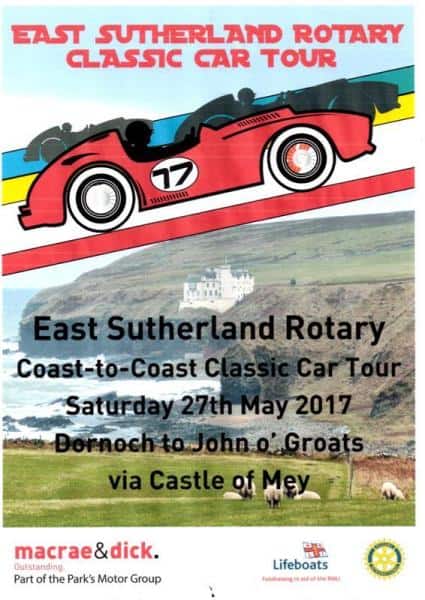 The East Sutherland Rotary ‘Coast to Coast’ Classic Car Tour 2017 takes place on Saturday 27th May 2017, with the 60 cars assembling in the Square from 9am. You can view a video of the 2016 tour HERE

The Royal Burgh of Dornoch Cathedral, Castle, Jail and Court House form the backdrop for the start of our 4th tour. The circular route from Dornoch to John O’Groats via the Castle of Mey takes in the majestic scenery of the north east Highland coast.

Last year drivers and their sponsors raised over £12,000, so we hope to us exceed that this year for RNLI and other charities supported by Rotary Club of East Sutherland Trust Fund (Scottish Charity No. 044261).

Cars gather in the Square at 9am and leave between 9.30 & 10am. Come and view the cars in the square before they set off on their trip.

The cars will return in time for the ‘first night of the Pipe Band‘ at 8pm in the Square,  which heralds the beginning of summer.  The Saturday night parades by the Dornoch Pipe Band followed by a display of Highland Dancing run until September.

Rejuvenate yourself in Dornoch this summer

Unfortunately at the moment, in the mids

Dornoch's range of independent shops are

We had over 200 entries to our #DornochI

Ten things to DO in Dornoch

Top ten things to do in Dornoch!

See below for available accommodation

Ten things to DO in Dornoch: For Dogs

Susanne Arbuckle from Adventures around